Coupling of bone resorption and formation by RANKL reverse signalling 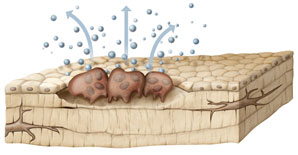 A well-known bone-removal pathway can operate in reverse to stimulate bone production, a Japan-led team has discovered. This finding could lead to new therapies for osteoporosis and other skeletal disorders.

A group that included scientists from Tokyo Medical and Dental University showed that bone-resorbing cells secrete a kind of membrane-bound packet, called a vesicle, with the RANK receptor on its surface. RANK’s binding partner, RANKL, is normally discharged from bone-forming cells, but the researchers showed that it can also stay on the cell surface, where it binds RANK-bearing vesicles to promote bone formation.

The researchers developed an antibody drug that, because of its dual mechanism of action, could prove more efficacious than other anti-RANKL agents on the market. The novel RANKL-targeted antibody not only inhibited bone resorption, as other drugs do, it also promoted bone growth by activating bone-forming cells with RANKL displayed on their surface.