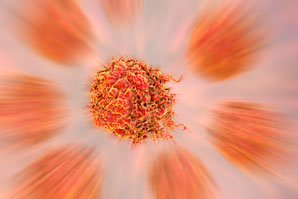 A new type of drug compound that puts cancer cells into a permanent sleep without damaging the cells’ DNA has shown promise in animal models of blood and liver cancers.

A team that included scientists from the University of Melbourne screened 243,000 compounds, looking for drugs that block KAT6A, a protein that when genetically depleted dramatically extends the life span of mice with lymphoma.

The researchers found one, which they chemically optimized to create two potent, selective inhibitors of KAT6A and KAT6B, enzymes that regulate the cell cycle by affecting when DNA is wound tightly on its spools.

The drugs selectively targeted liver cancer cells in zebrafish and arrested the progression of lymphoma in mice, with few side effects and little impact on healthy tissue. If human clinical trials give similar results, the compounds could offer “an entirely new weapon for fighting cancer,” said the University of Melbourne’s Tim Thomas in a press release.