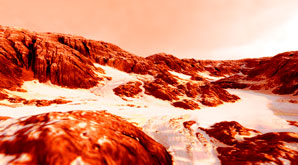 Mars may have been capable of supporting life 100 million years before Earth became inhabitable, thanks to its rapidly forming crust.

The last part of a planet to form is its hard, outer shell, but the timing of this formation process is hard to ascertain. A team including researchers from Curtin University studied the chemical properties of minerals called zircons, from several Martian meteorites, to uncover the early history of Mars.

They found that an early crust developed from an ocean of molten rock no later than 4,547 million years ago, just 20 million years after the birth of the Solar System. It was partially melted again, possibly by asteroid bombardment, then cooled and solidified 70 million years later. By then, gases released by the molten rock, such as water vapour and carbon dioxide, would have formed a thin atmosphere. This was around 100 million years before Earth got its crust, suggesting that Mars could have had a head-start on hosting life.

The findings support models of fast planet formation in our Solar System.