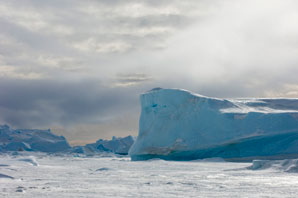 The loss of sea ice in Antarctica due to global warming may accelerate the break-up of massive ice shelves, scientists have found.

The break-up of ice shelves in Antarctica is a concern because it can raise sea levels around the globe, leading to increased flooding of low-lying areas. Climate scientists have found several mechanisms by which global warming can increase the frequency of such events.

Now, a team of six scientists, including a mathematical modeller from the University of Adelaide, has found a mechanism that had not been considered previously. They found that sea ice acts as a buffer that protects the ice shelves from the onslaught of ocean waves. As this buffer is removed due to rising temperatures, wave action will cause the edges of the ice shelves to flex, making them more vulnerable to break-up.

This effect is expected to increase global sea levels faster than previous predictions that did not account for it.