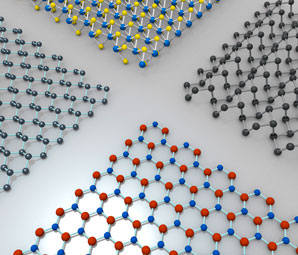 Adding a dash of salt to transition metals and chalcogens produces a broader range of two-dimensional (2D) materials, which could lead to better electronic and optoelectronic devices.

Although numerous compounds are possible, only a handful of so-called transition-metal chalcogenides (TMCs) have been created owing to the high melting points of their metal and metal oxide precursors.

An international team of scientists, including researchers from Nanyang Technological University in Singapore, has found that adding common table salt during chemical vapor deposition — a commonly used technique to make TMCs — lowered the temperatures at which the metal oxides melted.

The addition of salt made it easier for the metal oxides to react with the chalcogens to form oxychlorides, intermediate compounds used to create 2D TMCs. This may lead to a broader range of 2D TMCs whose properties could be customized for use in photovoltaic and sensor devices.