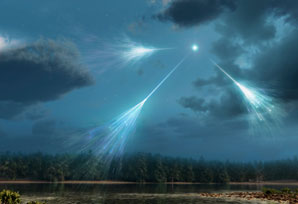 Physicists have used ghost-like elementary particles known as neutrinos to probe the internal structure of the Earth. This method represents a completely new way to investigate the Earth’s innards.

Neutrinos interact so weakly with matter that most atmospheric and cosmic neutrinos travel unimpeded through the Earth. But a tiny fraction of high-energy neutrinos are absorbed by atomic nuclei in the Earth’s interior.

Now, by analysing a year’s worth of data collected by IceCube, a neutrino detector at the South Pole, three scientists from the Spanish National Research Council have determined the Earth’s mass and internal density distribution. The results they obtained agreed with estimates obtained by conventional geophysical methods. In the future, as more neutrino data is collected, the team’s approach could reveal information that cannot be obtained by traditional methods.