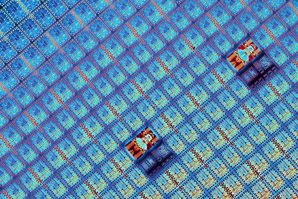 An emerging form of electronics has been extended to garden-variety semiconductors such as silicon and germanium.

The miniaturization of conventional electronics is beginning to bump up against physical limits beyond which it cannot go. Consequently, researchers are exploring a new form of electronics that applies mechanical pressure to induce local polarization in semiconductors via a phenomenon known as the piezoelectric effect.

So far this approach can only be used in semiconductors that have a certain crystal symmetry, meaning it cannot be used on conventional semiconductors such as silicon and gallium arsenide.

Now, a team that included researchers at Lanzhou University in China has found a way around this limitation. They induced a piezoelectric-like response in conventional semiconductors through distorting the crystal structure by applying pressure. The team used this approach to mechanically switch the electronics on a nanoscale.

This demonstration raises the possibility of realizing strain-modulated electronics in conventional semiconductors.