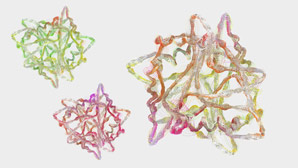 Researchers now have a powerful new tool for investigating the structures and dynamics of intrinsically disordered proteins.

The last few decades have seen great advances being made in our understanding of the structures of biological proteins, but most of this progress has been restricted to highly structured proteins. Intrinsically disordered proteins, which account for roughly half of cellular proteins, are much harder to characterize because they are difficult to crystalize for X-ray diffraction and they are too thin for electron microscopy.

Now, a team that included researchers from Kanazawa University has used high-speed atomic force microscopy (HS-AFM) — a technique that uses a nanoscale tip to probe the surface of a sample — to explore the structures and dynamics of several intrinsically disordered proteins.

The team showed that HS-AFM can map fully disordered regions as well as the borders between disordered and folded regions. This information complements data obtained by nuclear magnetic resonance.