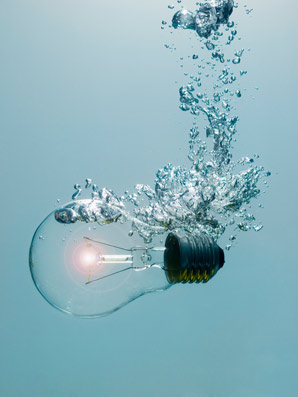 By using electrons that are not used to produce hydrogen fuel to generate electricity, an artificial ‘water-splitting’ system achieves a considerably higher efficiency than conventional systems.

Two key technologies for harvesting energy from sunlight are solar cells, which produce electricity, and artificial photosynthesis systems, which use light to split water and thereby produce hydrogen fuel.

Now, by creating a hybrid device that integrates the two technologies, a team led by a researcher at the Technical University of Munich has boosted the efficiency of hydrogen production.

In conventional water-splitting devices, many of the electrons generated in the device are lost before they can be harnessed for useful work. To overcome this problem, the team simply added a third electrical terminal to the back surface of their device. This siphoned off the electrons that were not used to split water, which could then be used to generate electricity.

This strategy gave a combined efficiency of about 20% — three times that of conventional hydrogen cells.