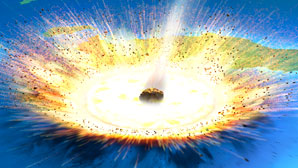 The oldest rocks on Earth may have been created by a barrage of meteorites that melted and stirred the planet’s surface.

Rocks from the Hadean eon — the first 600 million years after the Earth’s birth — are very rare, making it hard to discover how the crust evolved.

A team led by researchers from Curtin University studied the chemical composition of four-billion-year-old Idiwhaa gneiss from northwest Canada — the oldest known rocks on Earth. The analysis suggests that the rocks formed at temperatures of 800–900 degrees Celsius, which is far hotter than any natural source in the Earth’s crust. Using computer models, the researchers showed that meteorite impacts could have provided the heat needed to melt and reform the upper 3 kilometres of crust, and form Idiwhaa gneiss.

Meteorite bombardment is thought to have been common during the late Hadean, and so impact melt is a plausible origin of these ancient rocks.