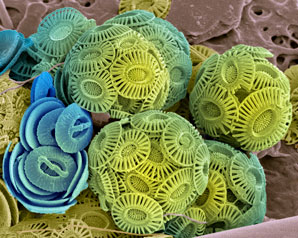 Ancient yet highly efficient algae could have triggered a major mass extinction event.

Around 445 million years ago, at the end of the Ordovician age, a glaciation wiped out about 85% of marine life. It is debated whether plants caused this cooling by removing carbon from the atmosphere.

A team that included researchers from the University of Science and Technology of China analysed late-Ordovician ocean sediments from Vinini Creek in Nevada and unearthed evidence of chlorophyll from ancient algae that had died and sunk to the seafloor.

The findings suggest that algal productivity increased rapidly over a few million years. Using a nutrient cycle model, the team calculated that atmospheric CO2 would have halved during this time, eventually triggering a glaciation.

This historic role for algae in the global carbon cycle reveals how even tiny organisms can affect events on geological timescales.