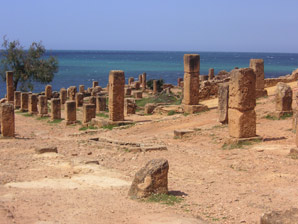 More than 50 heritage sites in Africa are at currently risk from rising sea levels due to global warming, with the number predicted to reach nearly 200 by 2050.

Coastal heritage sites around the world are under threat due to rising sea levels. But the risk to those lying on Africa’s 300,000-kilometre coastline has received much less attention than those in wealthier regions.

Now, a team led by researchers from the University of Cape Town in South Africa has conducted a large-scale analysis of the risk to more than 280 natural and cultural heritage sites on the African coast.

They estimate that 20% of the sites are currently at risk from a once-in-a-century extreme event, including the iconic ruins of Tipasa in Algeria.

The study highlights the urgent need to protect these sites from the sea, the researchers say.