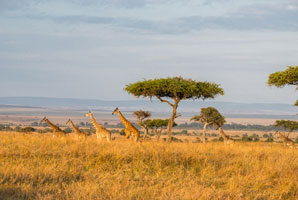 Overstated correlation between climate change and the onset of violent conflict could hamper African countries’ efforts to adapt peacefully to global warming.

Research into the link between climate change and conflict is suspected of focusing on the most accessible places where conflict is already rife — a propensity known as the ‘streetlight effect’ — but there was no proof of this, until now. A team including researchers from the University of Melbourne scanned the literature on climate and conflict from the past 30 years and found that Sub-Saharan Africa, where conflict data is abundant, was the most frequently studied. Other regions that are also vulnerable to global warming, such as Asia, South America and Oceania, are barely mentioned. These biases could overexaggerate the climate-conflict connection, while branding some countries as more ‘naturally’ violent.

Exploring how people adapt peacefully to climate change could be more valuable for policymakers, the authors suggest.