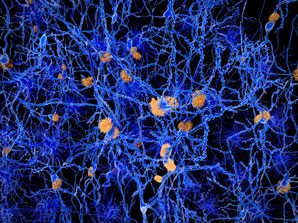 Large ensembles of molecules known to be impeccable hosts can attract very large guests. The hosts can form a superstructure that sticks to specific peptides — including the one implicated in Alzheimer’s disease.

Cyclodextrins and calixarenes are cup-shaped macrocyclic molecules often used to host small molecules within their central cavities. These macrocycles have been investigated as drug-delivery vehicles, for example.

Now, a team that included Nankai University chemists has shown that when macrocycles are induced to self-assemble into large ensembles, they will strongly and selectively bind to much larger targets.

By varying the macrocycles used, the structure can be tuned to bind to specific peptides. The team demonstrated this by designing a macrocycle ensemble that binds amyloid-β peptide, which forms toxic clumps in the brains of Alzheimer’s patients. The ensemble impaired the formation of these clumps and even dissolved existing ones.