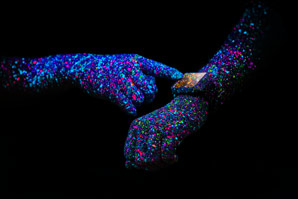 An ultrathin patch can monitor a person’s pulse and blood pressure while powering itself by harvesting energy from their movement.

Many people use smartwatches to track health metrics such as pulse rate and breathing rate. However, they have to be worn on the wrist and need to be recharged regularly. Wearable electronic devices based on thin films promise to overcome these limitations, but it has been challenging to produce sensors that are both flexible and self-powered.

Now, a team led by researchers at Osaka University has developed flexible wireless patches that can be placed anywhere on the body and that don’t need batteries because they use a piezoelectric film to convert movement of the body into electricity.

The patches have a micrometre-thick substrate as their base, making them flexible and almost imperceptible when worn. Attached to this substrate are highly flexible ferroelectric polymer transducers that act as both sensors and energy harvesters.