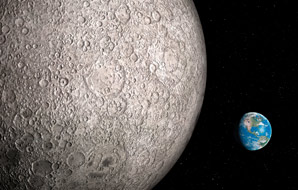 Asteroid showers that cratered the Moon’s surface 800 million years ago may have left a mark on the Earth’s climate.

Earth has been repeatedly bombarded by meteorites, but ancient impacts are hard to study because the scars are eventually erased by erosion and other geologic processes. The Moon, however, maintains an intact impact record on its cratered surface.

Now, a team led by Osaka University researchers has used images taken by Japan’s lunar orbiter, KAGUYA, to analyse 59 large craters. From these, they identified eight that formed simultaneously about 800 million years ago. By estimating the masses of the meteorites and applying the theory that asteroids strike Earth 23 times more often than the Moon, the researchers calculated that up to 50 trillion tonnes of meteoroids could have hit Earth during this time.

As well as delivering useful elements to Earth, this deluge of impacts may help explain the climatic changes of the Cryogenian era that followed.