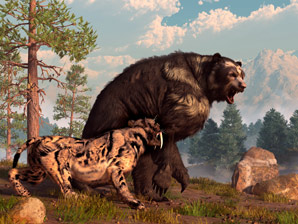 At the end of the last ice age, climate change altered biodiversity worldwide. In North America, this coincided with humans arriving, making it tricky to determine which event caused the changes.

To investigate biodiversity changes during the last ice age, a team led by researchers from Curtin University analysed the DNA of thousands of bone fragments and soil samples from a cave in Texas.

After the end of the ice age 13,000 years ago and another cold snap (called the Younger Dryas), the plateau had transformed from grasslands that hosted many burrowing and grazing mammals to open woodlands with far less biodiversity.

As temperatures rose again, plant diversity and small mammals returned, but many large animals such as camels and sabretooth cats did not.

The researchers suggest that climate change alone cannot explain the disappearances, so human hunting could be the main cause.