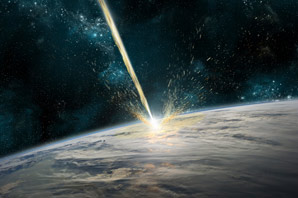 The earliest known meteorite to strike our planet may have triggered the thawing of ‘Snowball Earth’.

Earth’s meteorite impact record can provide clues to past changes in climate, oceans and life itself, but the ever-evolving landscape has made it tricky to complete the timeline.

Now, a team that included researchers from Curtin University has calculated the age of zircon and monazite crystals found in the 70-kilometre-wide Yarrabubba crater in Western Australia. The minerals contain tiny structures created in the heat of a massive impact.

The researchers’ calculations put this event at around 2.2 billion years ago, making it about 200 million years older than the next oldest impact.

The timing of the meteorite’s impact coincided with the end of a global glaciation. The team’s models suggest that if the meteorite had hit a 5-kilometre-thick ice sheet, it would have released up to 5 trillion tonnes of water vapour into the atmosphere, which is potentially enough to alter the Earth’s climate.