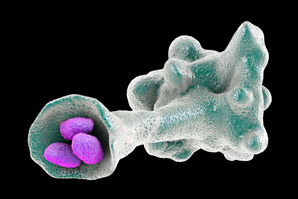 In a discovery that goes against textbook biology, a marine microbe has been found that can engulf other cells.

The ability to engulf entire cells by a process known as phagocytosis was thought to be restricted to eukaryotes—the cells of which contain membrane-bound structures such as the nucleus.

But in a scientific first, a team from the University of Tsukuba has discovered a shape-shifting bacterium with amoeba-like movements that can devour other bacteria and algae, enclosing the prey cells in specific compartments for further digestion.

Genetic analysis indicates that the Pacman-like engulfment in this microbe evolved independently of cell ingestion in other organisms. Still, this primitive phagocytosis provides support for the hypothesis that eukaryotic cells originated from one prokaryote scarfing down another.

The Tsukuba team named the unusual microbe after a hungry giant from Palaun mythology since they found it in the waters off Palau, in the western Pacific Ocean.