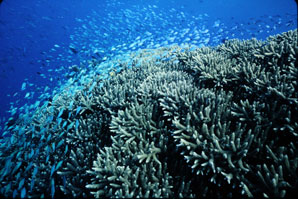 The diversity of corals and their associated invertebrates at the Great Barrier Reef in Australia has declined significantly over 91 years, the longest ecological survey of coral reefs conducted to date has revealed.

Researchers at Australia’s University of Queensland and colleagues analysed data from expeditions to Low Isles in the northeast of Australia in 1928 and 1954, in addition to their own data collected in 2004, 2015 and 2019.

They discovered that multiple events, including cyclones, temperature stress, coral bleaching and flooding, have led to a consistent decline in coral species richness. The team also found that numerous coral species are nearing extinction, while the diversity of coral-associated invertebrates is facing significant declines.

The findings highlight the importance of analysing long-term data to understand the multiple factors affecting reef decline and their potential recovery.