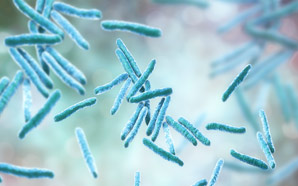 The atomic structure of a bacterial protein implicated in resistance to anti-tuberculosis drugs could help in the search for new medicines.

Two commonly prescribed drugs against tuberculosis act by inhibiting the microbe’s ability to synthesize its cell wall. But treatment with these drugs also activates a protein found in the tuberculosis pathogen called IniA, which gives rise to resistance to the drugs.

The researchers showed that the shape and folding pattern of IniA points to the protein mediating drug resistance through its role in cell membrane repair in the face of antibiotic stress.

Therapies that compromise this membrane integrity could thus help promote the microbe-killing potential of other anti-tuberculosis agents.