The photospheric origin of the Yonetoku relation in gamma-ray bursts 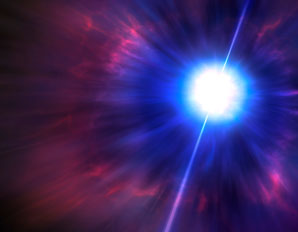 Photons escaping from gamma-ray bursts could be a major source of their immense energy.

Gamma-ray bursts are extremely powerful electromagnetic emission events that sometimes accompany the death of massive stars. After half a century of study, it is still unclear how the energy is emitted, although astronomers have identified a correlation between peak energy and peak luminosity.

A team that included researchers from Kanazawa University in Japan tested a popular theory that the light we see on Earth comes from the visible portion of the distinctive narrow jets that erupt from these dying stars. The team used supercomputers to model fluid dynamics and radiation transfer within the jet and found that the correlation between peak energy and peak luminosity could be the natural outcome of the jet breaking out of the star.

The researchers concluded that photospheric emissions could be the main source of energy in the first seconds of a gamma-ray burst.