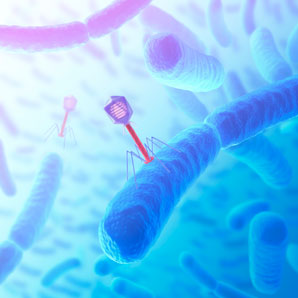 Researchers in Ireland have cultured the most abundant virus of the human intestines — a bacteriophage that preys on a prevalent gut bug called Bacteroides intestinalis.

The ability to study the phage in the laboratory should now enable researchers to investigate its roles in gastrointestinal health and disease.

A team led by scientists from University College Cork isolated the virus, dubbed ΦCrAss001, from the faeces of healthy human volunteers. They showed that the phage has a 102,000-letter-long genome and a spiky, lollipop-like shape.

The virus also has an unusual lifestyle: it kills bacteria when grown on semi-solid agar, but replicates in liquid cultures for weeks without hampering the proliferation of its host.

Further studies should help reveal the ecological impact of this phage on the human gut microbiome.