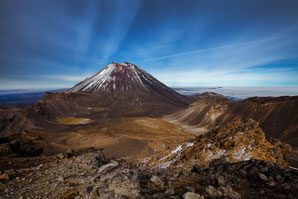 The last eruption of New Zealand’s Taupo volcano may have occurred up to 200 years after previous estimates had suggested.

The last eruption of Taupo has been dated many times by radiocarbon, giving results lying between 36 CE and 538 CE.

Now, a team that included researchers from the University of Melbourne has re-analysed the radiocarbon records for the Taupo eruption, gathered from ring patterns of trees killed by the blast.

They noticed that the oldest dates were clustered around the vent. The researchers deduced that carbon dioxide that was several thousands of years old was seeping from a magma chamber below the volcano into the groundwater, eventually making its way into the vegetation above ground. They estimated that the ancient gas had made the trees near the volcano appear between 40 and 200 years older.

If such ageing bias is widespread, the timings of other major eruptions may also need a rethink.