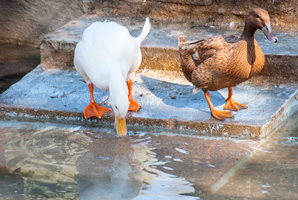 The mutations responsible for the white down feathers and larger bodies of the Pekin duck, an elite breed, have been identified, shedding light on how this breed was improved during domestication.

A team led by researchers at the Huazhong Agricultural University compared the genomes of 40 mallards, 36 indigenous Chinese ducks and 30 Pekin ducks.

These findings improve our understanding of what happens during domestication.