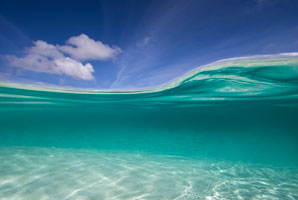 In the Northwest Pacific Ocean, just off the island of Hokkaido in Japan, a current carrying warm water north-eastward is thought to influence winter rainfall on the west coast of North America. But how this warm jet formed and why it remains anchored in that particular spot is unclear.

A team including researchers from Hokkaido University used regional ocean current models to investigate the role of a 500-metre ridge on the ocean floor. They found that swirling eddies flowing over the ridge displace the water above, which deflects Rossby waves — a natural phenomenon caused by the Earth’s rotation — at the boundary between the warm upper layer and cold lower layer of the ocean. This creates a northward flowing jet at the surface, 5.5 kilometres above.

This study shows that small undulations on the ocean floor could play a bigger role in circulation, and therefore climate, than previously thought.