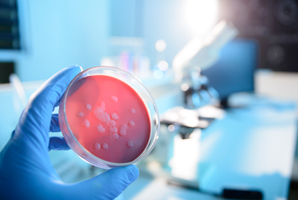 A technique that can detect miniscule amounts of biomolecules without using complex equipment offers a versatile and inexpensive way to detect diseases, according to a study in Nature Communications.

Diagnosing diseases involves detecting nanosized bioparticles, such as DNA, proteins and viruses in biological samples. This typically requires using advanced optical technologies such as fluorescence microscopy and spectrophotometry, which can be complex and costly.

Now, an international team of scientists, led by researchers from Nanyang Technological University in Singapore, has developed a microfluidic chip that can detect proteins down to parts-per-billion levels using standard laboratory microscopes.

The device measures biomolecules from the changes in surface forces and size of sideway movements of a microbead substrate arranged in pillar arrays. It can detect nano-biomolecules in real time significantly faster than detection based on fluorescent labels.

The work could see use in point-of-care diagnostics.