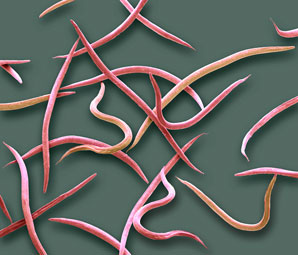 Bacteria that reside specifically inside roundworms could be used to deliver targeted treatments to these parasites.

Roundworms that infect sheep and other animals have developed resistance to common anti-helminthic drugs, and hence alternative treatments are being sought.

Now, researchers at University College Cork in Ireland and colleagues have conducted DNA analyses to investigate the differences between the microbiomes, or bacterial environments, of two types of roundworms and of the lamb guts they infected.

The team found significant differences in the microbiomes. They also discovered that the lamb and roundworm microbiomes changed as the two became more exposed to each other over time.

Interestingly, Escherichia coli/Shigella bacteria were more specifically located inside the roundworms. The researchers were able to infect roundworms in a Petri dish with engineered E. coli, suggesting this bacterium could be used as a drug-delivery vehicle for treating the parasite.