The brain adapts to dishonesty 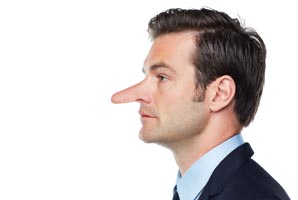 A new study lends scientific support to the old adage that small lies lead to larger ones.

Researchers at University College London devised a game in which participants estimated how many pennies were in a jar, based on a picture. They were led to believe that their estimate was being recorded by a fictitious second player. By varying who would be rewarded for accurate guesses or overestimates, the researchers manipulated the participant’s incentive to deceive their fictitious partner.

The lies grew bigger when participants were rewarded for lying. A fMRI analysis showed that the response of a brain region known as the amygdala decreased with each self-serving lie. The reduction in amygdala response also reliably predicted the scale of the next lie. Since the amygdala is associated with emotions, the increase in dishonesty may result from declining guilt about lying. Understanding the biological mechanism behind this slippery slope may help policymakers design deterrents to reduce deceit.