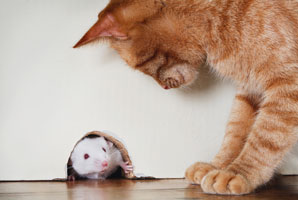 Mice are so hardwired to fear cats, that their mere smell strikes terror into the hearts of individuals who have never even set eyes on their feline nemeses.

A Zhejiang University-led team exposed mice who had never seen a cat to a synthetic predator odour called TMT, or ‘odour of cat’, and observed their behaviour to find out what neurons were involved in their ‘innate’, unconditioned fear response. They discovered two types of neurons, described by author, Wang Hao, from Zheijiang University, as “fear switches” that influenced the mice’s behaviour both with and without TMT.

Using light to block one type of neuron and activate another in an area of the brain called the laterodorsal tegmentum, the team were able to suppress the mice’s innate fear response in the presence of the odour in both cases without affecting their response to learned fear.

The team notes that their results could indicate a possible target for treatment of anxiety disorders, which are associated with a heightened innate fear response.