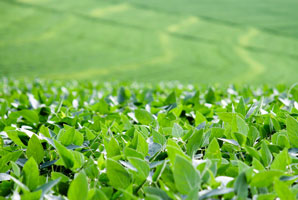 A gene shared with a common Eurasian roadside weed has enabled the usually high-latitude soybean to thrive in areas at much lower latitudes, such as Brazil, by triggering it to flower even in longer fixed daylight hours.

An international team, including researchers from the University of the Chinese Academy of Sciences, have mapped the genome of the long-juvenile strain of soybean, which has overcome the soybean’s ancient need for lengthening nights and shorter days to trigger it to flower. Before this strain was developed, soybeans grown at lower latitudes flowered early and had poor yields.

They identified the J gene, related to a similar gene found in thale cress (Arabidopsis thaliana) — a weed found along roadsides and in disturbed soils — and which actively promotes flowering during shorter daylight periods. The discovery could help breeding programmes to further adapt this vital economic crop to other tropical regions.