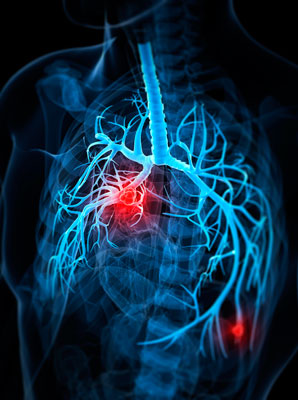 Genetic analysis of malignant mesothelioma tumours has revealed diagnostic profiles for this rare cancer, which attacks the lung lining and usually kills within three years.

An international team, including scientists at Genentech in California, sequenced DNA and RNA from more than 200 mesothelioma tumours to build a genetic profile of the disease. Several mesothelioma tumour subtypes with different prognoses had previously been identified, but distinguishing between them during therapy remained a challenge. Four distinct gene expression patterns corresponding to different subtypes were found in the sequencing data, which will allow molecular diagnosis.

The study also revealed mutations in more than 2,000 genes in the tumours, including ten which were significantly more mutated than others. In addition, the team discovered larger alterations such as gene fusions and changes in gene splicing in the tumour samples. These profiles may help guide the care and treatment of mesothelioma patients.