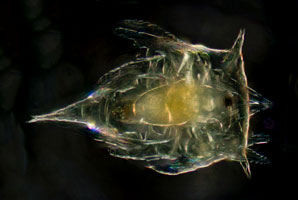 The varied response of marine plankton to climate change could shake up the oceanic food web.

As global temperatures rise, lines of equal temperature in the ocean called isotherms move towards the poles. A team including researchers from Deakin University in Australia studied data from thousands of sea water samples to assess how the roaming range of 35 types of plankton around the North East Atlantic and the North Sea changed during periods of cooling and warming over the last six decades. Some plankton groups, such as the crustaceous copepods, kept pace with the moving isotherms, highlighting their preference for certain sea temperatures. On the other hand, diatoms — single-celled algae — moved far slower, suggesting they are better adapted to fluctuating temperatures. Some species did not relocate at all and their numbers fell.

The team noted that global warming is likely to redistribute many plankton groups, which could put grazing pressure on certain species and create problems further along the food chain.