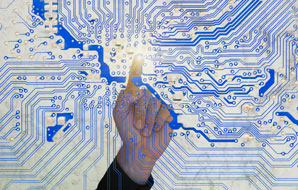 Computers could perform at light speed using miniature circuits that combine electronics and photonics on a single nanochip.

Using light to send information through a circuit at the nanometre scale is difficult as its wavelength is larger than the width of the tiny wires involved. This can be overcome by using surface plasmons — electromagnetic waves on the surface of the wire — to manipulate the light rushing through the circuit.

“This is the first time that we can complete the circle going from plasmons to excitons and back to plasmons” says one of the authors. The technique may enable rapid information processing in tiny devices.