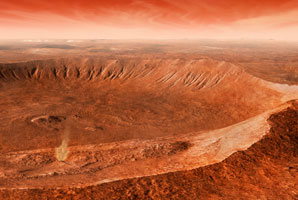 Data from the Mars Exploration Rover Opportunity mission indicates that for millions of years the surface of Mars has been too dry to support life, according to a study published in Nature Communications.

An international team of scientists, including researchers from Curtin University, examined meteorites at Meridiani Planum — a plain close to the planet's equator — on the surface of Mars for the presence of liquid water, requisite for life.

To establish the dryness of the planet’s surface, the researchers measured how long it takes for rust to form — which depends on moisture levels — from the iron in the meteorites, to determine current chemical weathering rates.

Estimating the meteorites were exposed to weathering for millions of years, they found weathering rates were one to four orders of magnitude slower than for similar meteorites from Antarctica, the driest place on Earth, indicating Mars was too arid to support life during this period.