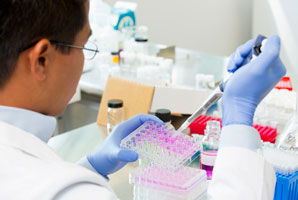 Blocking a critical growth factor in a tumour’s microenvironment could boost the cancer-killing potential of immunotherapy.

An international team led by scientists from Genentech, a Roche subsidiary, examined tumour samples from hundreds of patients with advanced-stage urinary cancers. All of the patients had received atezolizumab, a drug that blocks an ‘off switch’ signal that tumours use to ward off an immune onslaught, but only 22 per cent of them responded favourably.

The researchers found a strong association between the lack of drug response and the presence of cells in the tumour surroundings that expressed high levels of transforming growth factor β (TGFβ), a protein that keeps cancer-killing T-cells from reaching the tumour core.

In a mouse model of breast cancer, delivering a drug that targets TGFβ along with a mouse version of atezolizumab allowed more T-cells to penetrate the tumours, triggering tumour shrinkage. The findings, described in Nature, suggest that this dual therapeutic strategy merits further clinical testing in patients.