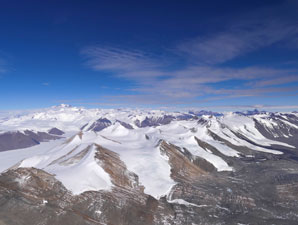 Bacteria can survive the inhospitable wastelands of Antarctica by scavenging gases from the air.

The deserts of Antarctica are frozen, arid wastelands in complete darkness for many months. The nutrient-poor soils were thought to be devoid of life, yet a diverse range of microbes have been found there. Scientists wanted to find out how life could survive without energy from light, heat or food.

A team including researchers from the University of New South Wales studied the genomes of microbes living in soil samples from two ice-free sites in East Antarctica. They identified genes in the most abundant species that enable them to extract energy from hydrogen, carbon monoxide and carbon dioxide gases, which they pluck from the air.

Atmospheric gases could be a vital energy source for organisms in other apparently inhospitable environments, such as the Atacama Desert or even other planets.