Human occupation of northern Australia by 65,000 years ago 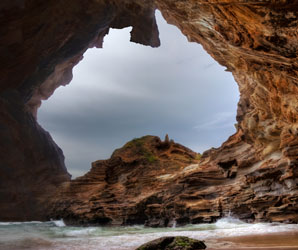 The first humans to set foot in Australia arrived thousands of years earlier than previously thought.

Dating of artefacts dug up at Madjedbebe, an archaeological site in northern Australia, has placed the arrival of modern humans at anything from 50,000 to 60,000 years ago. A team including researchers from the University of Wollongong have studied 11,000 artefacts from new excavations at the site, including numerous stone tools. Using optical dating, which estimates the time since a mineral, perhaps present in stone tools, was last exposed to sunlight, they calculate the first human occupation of Australia to be around 65,000 years ago. This coincides with lower sea levels and a cooler wetter climate in northern Australia around this time.

The findings show that humans reached Australia long before the extinction of the continent’s megafauna, and push back the date for modern humans’ first move out of Africa.