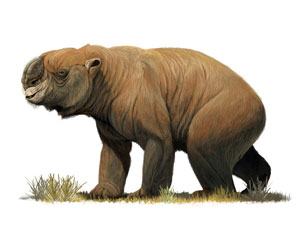 The first humans to reach the Australian coast quickly migrated to the hot and dry interior, where they developed tools to prey on the giant beasts that roamed the continent at the time.

The discovery of tools, pigments and other artefacts from the Warratyi rock shelter, 200 kilometres inland from the South Australian city of Adelaide, indicate that Aborigines settled the arid zone around 49,000 years ago, some 10,000 years earlier than previously thought.

The site also included fragments of a leg bone from the rhino-sized marsupial Diprotodon optatum and an eggshell from a giant flightless bird. The age of these fossils, the absence of tooth marks from predators, and their position up a path too steep for these megafauna to climb also provide the best evidence to date that people were hunting and eating these long-lost creatures.

A large Australian research team that included investigators from Flinders University reported the findings in Nature.