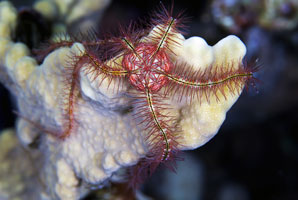 The deep sea makes up more than half our planet’s surface, but what life thrives there is still largely mysterious.

Now, a relative of the starfish, the five-armed ocean floor-dwelling ‘brittle star’, has given an inkling about the diversity of the dark ecosystem.

A team of scientists from the UK and Australia, including University of Melbourne researchers, searched historical journals and museum databases to collect more than 165,000 brittle star distribution records and created a global map of more than 2,000 species.

The researchers were surprised to discover that at depths past two kilometres the greatest number of species were not found in the warm, nutrient-rich tropics, but in the mid-latitudes, including southern Australia, New Zealand, Japan and the North Atlantic.

Their map forms a baseline to track how human activities such as deep sea fishing and mining impacts the deep sea and could help guide policy-makers choose which areas should be targeted for conservation efforts.