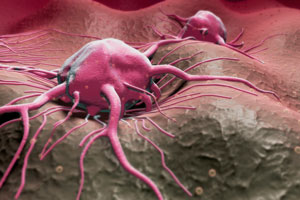 A new route by which tumours develop has been identified by a China-US team, including researchers from Sichuan University.

In more than half of cancers, a tumour-suppressing gene, TP53, is disabled. Now, the team have shown that deletion of genes other than TP53 also promotes cancer through mechanisms unrelated to TP53. Their findings were described in a recent Nature paper.

The team undertook an extensive genomic analysis of nearly 5,000 tumours across 18 different cancer types focussed on the loss of parts of chromosome 17p, which carries TP53 along with about 300 other genes. They concluded that genes other than TP53 may be implicated in 17p loss.

They tested this hypothesis in a mouse, and deleted one half of the pair of 11B3 chromosomes, which are similar to the human chromosome region 17p 13.1. Cancers developed in half the time of untreated mice. They also found that the deletion of genes other than Trp53 — the mouse equivalent of TP53 — contributed to cancer progression.