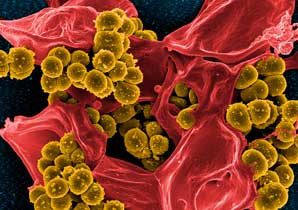 A new antibiotic-antibody combination drug has been developed by researchers, including some from Genentech (a member of the Roche group), that targets and kills stubborn ‘superbug’ bacteria. These resilient bugs, such as methicillin-resistant S. aureus, better-known as MRSA, are resistant to traditional antibiotics and can cause serious infections such as sepsis once they make it into the bloodstream.

The US-Danish team joined an anti-S.aureus antibody to an antibiotic and tested its effectiveness in both in vitro and in vivo environments. The beauty of their approach was that the antibody only targeted ‘host cells’ that had been invaded by the bacteria, which enabled delivery of the drug right where it needed to be. This targeting will allow the effective use of smaller amounts of antibiotics, “it’s another way to repurpose some previously shelved antibiotics.” Sanjeev Mariathasan from Genentech told The Guardian.