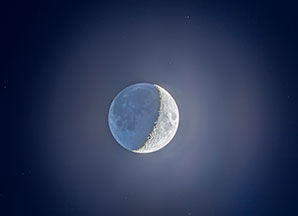 Recent reductions in the Earth’s albedo may have added almost as much extra energy to the atmosphere as human activities have during this time.

The Earth reflects about one third of the light it gets from the Sun back into space. Known as the Earth’s albedo, this parameter affects global temperatures, but accurate data on how it might be changing had been lacking.

Now, a team that included researchers from the University of La Laguna in Spain has assessed albedo fluctuations from 1998 to 2017. They did they by measuring earthshine — light from Earth that is reflected from the unilluminated portion of the Moon.

The team observed a gradual decline in albedo over that period, meaning the Earth is retaining more sunlight, which could contribute to global warming.

The albedo variation may be due to reduced cloud cover over warming seas, resulting in a lower reflectivity.