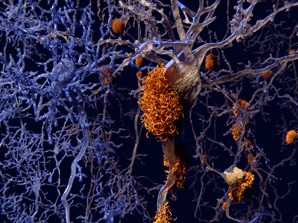 The brains of people with disorders such as Alzheimer’s disease are afflicted by a toxic cocktail, which includes misfolded amyloid-beta proteins, metal ions and reactive oxygen species.

Using the basic principles of redox chemistry, a team led by researchers at Korea Advanced Institute of Science and Technology (KAIST) has developed simple molecules that can react with and detoxify a whole range of these damaging species.

The team designed a basic aromatic molecular structure whose redox reactivity they could tune by attaching different side chains. The most effective candidate, which had two amino side chains, was able to mop up free radicals and also capture metal-bound and metal-free toxic amyloid-beta.

In an animal study, the lead candidate molecule reduced amyloid-beta deposits and improved cognitive performance in a mouse model of Alzheimer’s disease.