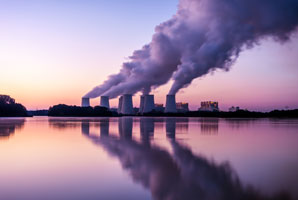 A chemical that absorbs carbon dioxide but repels water could improve the efficiency of carbon capture and storage.

Removing carbon dioxide (CO2) from the air can help reduce air pollution, but current methods absorb water vapour, which must be burned off before CO2 can be stored, making the process energy intensive. To address this, researchers from Kanazawa University added water-repellent molecules to a range of CO2 absorbing compounds of benzene-containing amines. They placed a portion of the best performing chemicals on scales in open air for two weeks and weighed them regularly to determine the amounts of water and CO2 absorbed.

The team found that chemicals made from xylylenediamines absorbed CO2 but not water, with meta-xylylenediamine (MXDA) absorbing the fastest. The researchers then dissolved the MXDA-CO2 product in water and exposed the solution to air, which left a residual white solid containing no water. Heating the solid to 120°C released dry CO2, which can be stored without further dehydration.

If they work on an industrial scale, waterproof CO2 absorbents could reduce energy used by carbon capture and release projects.