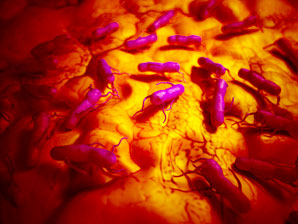 Heating bacteria with laser beams could be used to kill cancer cells.

The genetically modified and safe form salmonella VNP20009 is drawn to the oxygen-deprived centre of tumours and could be useful in cancer biotherapy, which uses living organisms to fight diseases. However, its anticancer activity in animals has not been replicated in humans. A team, including researchers from Sichuan University, partially coated VNP20009 with polydopamine — a biodegradable compound that heats up under electromagnetic radiation. They then injected the modified microbe into mice with skin cancer and observed it accumulate in tumours.

The team shone an infrared laser beam into the tumour. This heated up the polydopamine, destroying the surrounding cancer cells. These mice survived two to four times longer than mice treated with either pure VNP20009 and laser heating or the coated version without heating.

This approach could improve the precision and safety of combination therapies.