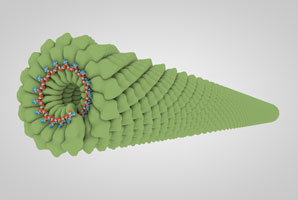 Surface-tunable non-spherical viral proteins that yield different shaped crystals could expand the production of nanomaterials, according to a study published in ACS Nano.

Crystals assembled from biomolecules, such as DNA and proteins, are set to transform numerous fields, including biomaterials, optics, catalysis, and electronics, because of the inherent physicochemical and structural characteristics of their nano-sized building blocks. However, difficulty in arranging and orienting non-spherical units into extensive well-ordered networks have limited the fabrication of protein crystals to assemblies of spherical building blocks.

A ShanghaiTech University-lead team has now generated crystals using the rod-shaped protein shell that protects the DNA of the tobacco mosaic virus. The researchers modified the outer surfaces of the viral protein by site-specific mutations using amino acids, which allowed them to tailor the resulting crystals. Specifically, when they decorated the proteins with the sulfur-bearing amino acid cysteine, they obtained structures in which adjacent building blocks were held by sulfur–sulfur bonds, whereas the nitrogen-containing histidine gave rise to a hexagonal arrangement in the presence of zinc ions. This can widen the scope of functional supramolecular materials.