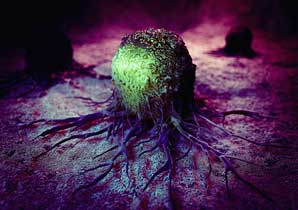 Some cancer-killing drugs issue a direct hit, while others employ a siege-like approach and starve the tumour instead. Now, a US-China team, including a researcher from Nanjing Tech University, has developed a method to trap a cocktail of both treatment types in the right place long enough to complete their lethal mission.

To make the drug cocktail less vulnerable to being neutralized by the tumour, the researchers included two special ingredients in the package, which spanned a mere 100 nanometres. A scaffold made from protein HSA was the key to holding the drugs in place. It was assembled by an enzyme called transglutaminase, which only became active once a coating of hyaluronic acid dissolved on contact with the tumour.

The team found the drug-delivery ‘depot’ was able to shrink tumours in an animal model ten times more effectively than by drugs alone.