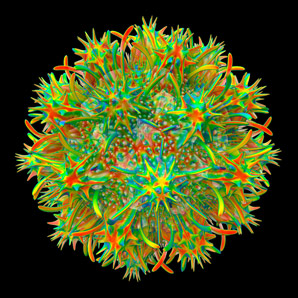 Tailor-made drug-delivery nanocapsules could be created using a new set of design rules.

Smart drug-delivery systems, which selectively release their therapeutic cargo at target cells, could boost drugs’ efficacy while reducing side effects.

Self-assembling nanomaterials called block copolymers have been investigated for their drug-delivery capability, but less attention has been paid to a family of polymers called dendrimers.

Whereas most polymer molecules are long, single chains, dendrimer-type polymers have a highly branched structure. This structure can result in self-assembled nanocapsules with a surface that bristles with a huge number of attachment sites for targeting groups, enhancing delivery. Alternatively — or in addition — a bristling inner surface could bind more active drug, boosting each capsule’s loading capacity.

A team led by researchers at Peter the Great Saint-Petersburg Polytechnic University has shown that by varying the composition and structure of the initial dendrimer, these materials can be designed to self-assemble into a tailored range of structures potentially suited to different drug delivery tasks.