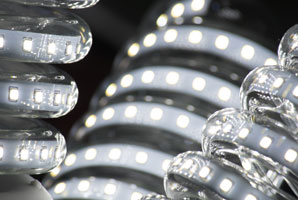 Tuneable white light can be generated by a molecular structure made from europium, a heavy metal, combined with an organic acid.

Metal-organic frameworks (MOFs) are scaffold-like structures of metal ions linked by struts of organic molecules. They can be used in optical devices and biosensors as some metals glow when stimulated by UV light, but white light is hard to achieve without a mix of several, often expensive, metals.

Now, a team led by researchers from Nanjing Tech University have made a single component MOF by mixing europium (Eu) nitrate and oxybisbenzoic acid (H2obb) in a chalky solution. Varying the temperature and pH made the H2obb molecules and the Eu ions self-assemble into a MOF which, upon stimulation by radiation, gave off a uniform white light. The whiteness could be adjusted by varying the radiation wavelength.

The Eu-based MOF could lower the cost of white light emitting diodes for general lighting and display uses.